18 / 100
Powered by Rank Math SEO
A month-long study conducted by an NGO has found that the residents living in the Kharghar-Panvel-Taloja belt are breathing .

In fact, the study suggests that morning walks could end up doing more damage to people’s health than good.

A month-long monitoring was carried by the between November 13 to December 13, 2020, by installing five low-cost real-time air quality monitors.

One monitor was installed at area of , while four in residential areas including sector 13 in , sector 36, and sector 7 in and Navade in Taloja.

According to the study, residents in the area were breathing polluted air for 17 hours every day, which threatens the health of lakhs of citizens.

Though the highest levels of Particulate Matter (PM) were recorded in the early hours of the morning, residents spend nearly two-thirds of their day breathing in polluted air, says the study.

Of all the five locations, the PM 2.5 levels at MIDC, Taloja was found to be the highest. 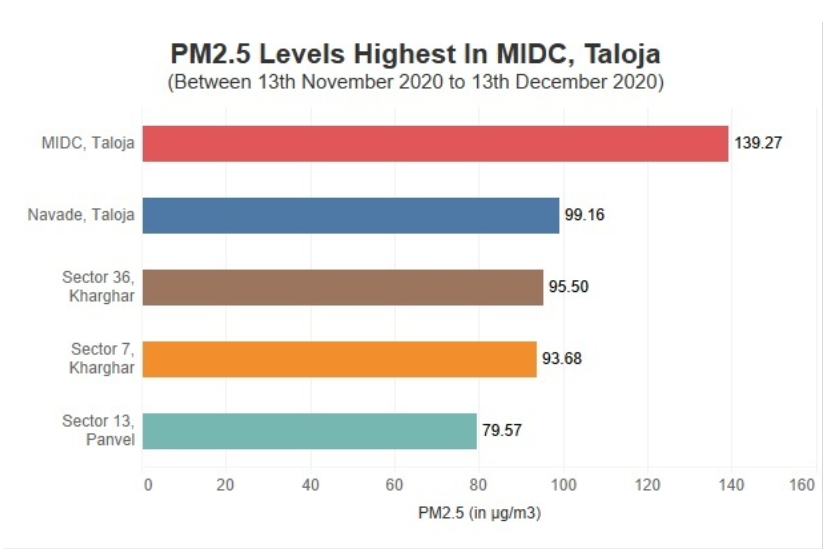 Speaking about the survey, Bhagwan Kesbhat, Founder of Waatavaran Foundation as well as a resident of Kharghar, said, “The key reasons for initiating this first-of-its-kind study in this area was to not only understand the air quality that people were breathing but to also highlight the fact that the Maharashtra Pollution Control Board (MPCB) and the civic body have failed to provide real-time air quality monitoring system.”

The NGO said that it will be sharing the detailed report of this study with the Panvel Municipal Commissioner, local elected representatives as well as the State environment department and MPCB.

It has also suggested setting up Continuous Ambient Air Quality Monitoring Stations in Panvel to make sure real-time data is available.
However, interestingly, no unusual peak was observed during the Diwali week, indicating that most citizens adhered to the ‘no-crackers’ rule.

Dr. Sundeep Salvi, Director, Pulmocare Research and Education (PURE) Foundation said that the study has shown that half a million people living in Panvel are constantly exposed to high levels of particulate matter air pollutants.

Masks: The most important fashion accessories

2020 might have started with renewed and interesting fashion goals, but as the year progressed and coronavirus wreaked havoc in the world, a never-thought-before ‘fashion accessory’ took over the global market — masks. The humble mask had started off as a safety measure against COVID-19, but it soon transitioned into a style statement, with people getting as creative as they could with their masks.

From gold and silver, to animal prints, to eco-friendly, 2020 saw a range of masks being sported confidently by people. Here are some pictures from around the globe. Who knows, you might just want to pick up a few tips from here to pick your next mask!

When the coronavirus outbreak, which started in China’s Wuhan, was declared as a pandemic, the first advisory by the World Health Organisation emphasised on the use of masks to cover our faces, so as to minimise the risk of contracting the virus. The N95 mask was touted to be the most effective mask against the virus, and shops ran out of those, with people stocking up their homes with the ‘most essential’ item. However, it was later declared by WHO that the N95 masks are as safe as any other masks, which then saw people turning to creative alternatives.

Shankar Kurade, a resident of Pimpri-Chinchwad of Pune district, got himself a mask made of gold worth Rs 2.89 lakhs. He had said, “It’s a thin mask with minute holes so that there’s no difficulty in breathing,” adding, “I’m not sure whether this mask will be effective.” Following in his footsteps, another man from Odisha got a gold mask made from Mumbai’s Zaveri Bazar for Rs 3.5 lakhs, and it weighed around 100 grams.

The 14th century Plague doctor masks which were used by the healthcare professionals during the deadliest bubonic plague, made a comeback in 2020. Specially designed with beaks, the mask was worn by actress Radha Mitchell when she walked down the red carpet at the Venice Film Festival. Reuters photos

Why only cover your nose and mouth, when you can get a little more creative and protect your entire face? Earlier this year, people in Japan were seen sporting masks that looked like pig heads. The quirky outfit caught the world’s attention, and people even tried to come up with similar masks which looked like the heads of other animals. Reuters photos

Speak of a trend and trust Bollywood to catch up with it as soon as it can. While the actresses of the Hindi film industry have always inspired people to amp up their sartorial choices with the various outfits they wear, actress Adah Sharma took it upon herself to introduce some funny masks to her fans. She was recently spotted out-and-about in the city, sporting a chimpanzee mask, and even gracefully posed for the paparazzi while at it. Photo source: Yogen Shah

As the demand for masks went up, the prices too sky-rocketed, compelling people to turn to more economical ways. A Palestinian mother was snapped making her children wear makeshift masks made out cabbage earlier this year. AP Photo

Best out of waste

A Philippines resident was spotted wearing an improvised mask-cum-face shield made out of a plastic water tank to protect himself from getting infected with the virus. Photo: AFP

Improvisation at its best

Several nations around the globe imposed lockdowns in order to keep their citizens safe. However, some of these nations also witnessed protests from the same citizens against the lockdown restrictions, as they complained that the rules created obstacles in their daily lives. During one such protest in Berlin, Germany, a man was seen using underwear as a face mask to protect himself from coronavirus. Reuters Photos

Gas mask or the ‘Alien mask’

A student was spotted wearing a gas mask in Idaho, along with a gown and cap for his graduation ceremony. Pictures of the boy went viral on the internet, with people dubbing it as the ‘alien mask’. AP Photo

In a first, citizens get involved in official bird count at Karnala Bird Sanctuary

NMMC to have its own medical college